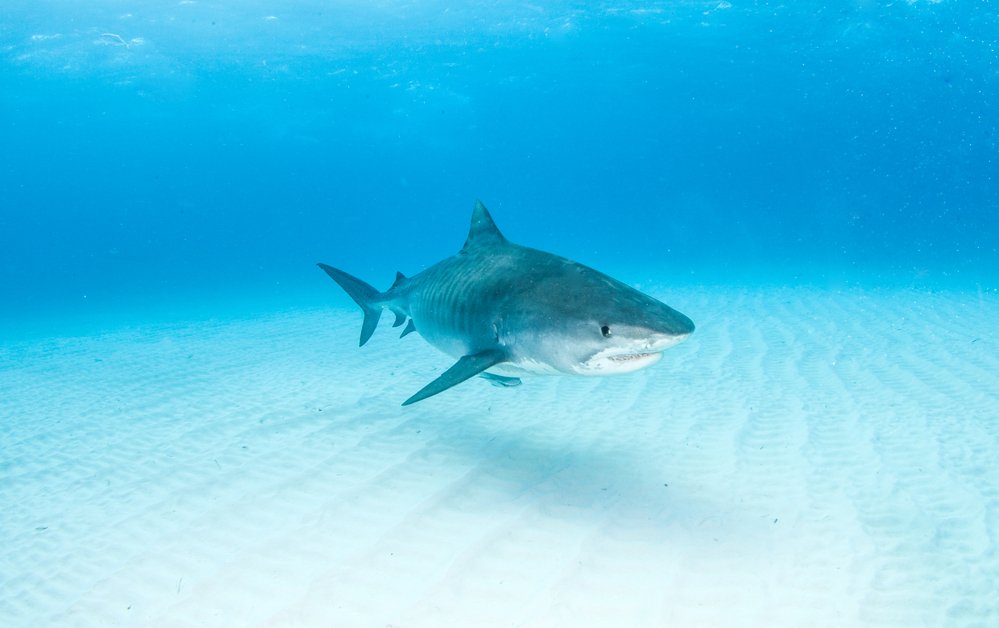 Tiger Sharks generally feed on schooling fish, squid, cuttlefish, crustaceans, and sea birds. They are also preyed upon by more giant sharks and orcas. Their average litter size is usually between 30-35.

Here are some fun facts about tiger sharks:

What is a tiger shark? Description

Tiger sharks are a robust species of shark belonging to the order Carcharhiniformes. An impressive sight, they can grow up to an astonishing 17 ft (5 m) in length and weigh up to 1 900 lb (860 kg).

Interestingly, there is sexual dimorphism in the species, with females typically being 3 ft (1 m) larger than males.

These large predators have a striking blue-grey to light green skin color with darker charcoal stripes on their sides and a white underside, resembling the Great White Shark. Even more interesting, the stripes on juvenile tigers are usually more prominent than those of adults.

Tiger sharks are a fearsome species of predator that inhabit the world’s oceans, both tropical and temperate. Known to roam deep waters, usually around 140m below the surface, they are also known to frequent shallower coastal areas, including Hawaii, the Caribbean, and Florida. They are nomadic creatures that follow warmer-water currents around the ocean during the summer and stay close to the equator during the winter. Although rarely encountered, tiger sharks have attacked humans, making them a species to be respected and feared.

Tiger sharks are bold hunters that prowl the oceans at night for their next meal. They feed on fish, sea turtles, squids, seals, dolphins, and even other sharks, making them the apex predator in the sea with few adversaries (except for orcas).

During the annual breeding season between March and May in the Northern Hemisphere and November and December in the Southern Hemisphere, males use their impressive teeth to hold the female in place during mating.

With the Carcharinidae family being unique in that the embryos hatch and develop internally, the female will carry up to 100 embryos for up to 16 months before giving birth to around 35 live, fully-developed babies up to 30 inches (76 cm) long.

Though their exact lifespan is unknown, they are known to live for at least 12 years, but some people assume they live for 20-50 years.

The tiger shark is a skilled predator because of their snout, electric sensing ability, and sensory organs. It can sense small vibrations in the water, which helps them detect prey easily. No tasty fish or sneaky crab is safe when the tiger shark is nearby.

Diet: Tiger sharks will eat anything

The tiger shark is undoubtedly a force to be reckoned with and can proudly claim to have one of the widest-ranging diets of all shark species. When it comes to food, it is open-minded, curious, and has a big appetite. Its instinct is to be an all-consuming predator which eats anything from tiny sea creatures to inedible objects. With the ocean becoming more polluted with human waste, this is a dangerous instinct for the shark – especially considering its large size.

Tiger sharks have a special weapon: their super sharp teeth! Each tooth is serrated and has a sideways-pointing tip on either side of the mouth, perfectly designed for cutting through challenging prey. From sea turtles with their large shells to other unsuspecting creatures, their teeth make it easy for the tiger shark to take down their game quickly. As if that’s not enough, they replace their teeth throughout the shark’s lifetime, so the “man-eater” is always ready for its next meal.

Tiger sharks are a vulnerable species due to overfishing and bycatch. Unfortunately, illegal fishing has caused their numbers to decline, leading the IUCN Red List of Threatened Species to classify them as “Near Threatened.”

Tiger- and sand tiger sharks have distinct differences, which separates them into two species.

Tiger sharks are found in warm oceans and have a larger and more slender bodies and a vertical pattern on their body.

Sand tiger sharks, on the other hand, are found in temperate waters near the coast, have more compressed and pointed teeth, and have a spotted pattern on their body.

The Tiger Shark is more prominent and more streamlined, prefers the open ocean, and its diet consists of fish and other marine life. The Bull Shark is smaller and bulkier, can navigate sea and freshwater, and eats mostly fish.

The Tiger shark is bigger and more aggressive, has a more robust body and a blunt snout, and eats a more varied diet, consuming almost anything. On the other hand, the Great white shark has a more streamlined shape and a pointed snout and feeds on fish and marine mammals.

There are a few differences between these two species, mainly that the tiger shark is more prominent in size, has a more muscular body, is more aggressive, lives in deeper waters, and is more active during the night. On the other hand, the hammerhead shark is smaller, has a distinctive hammer-shaped head, is more opportunistic, lives closer to the shore, and is more active during the day.

Are tiger sharks dangerous to humans? 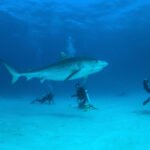 While the shark can test-bite humans, we are not a natural prey item for it. However, bite injuries can be fatal. Despite their intimidating reputation, the number of actual human-shark interactions each year is relatively low, and even fewer result in an attack. The truth is that humans are much more dangerous to them than they are to us. So while it pays to be cautious around tiger sharks, there’s no need to be scared to go swimming. These powerful predators prowl the ocean depths, so it’s rare to see one in shallow water. But if you ever spot one, it’s best to admire them from a safe distance. 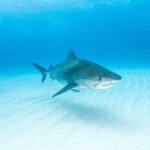 The world record for the biggest tiger shark ever caught is a massive whopping 1,785 pounds and 16 feet long. Alf Dean made this record-breaking catch in August of 1959 off the coast of Cedros Island in Mexico. Alf was an Australian fisherman fishing with his brother during his vacation to Cedros Island. His brother caught a smaller 400-pound tiger shark earlier that day, and then Alf broke the world record by capturing the much larger one later that same afternoon. It took over two hours for them to reel in the beast. Due to regulations, Alf could not keep the shark as a trophy because it had to be released back into the ocean. 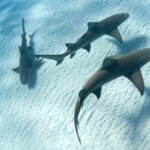 Unlike many other shark species, tiger sharks are oviparous, meaning they lay eggs rather than give birth to live young. The female tiger shark will lay up to 80 eggs at one time in a protected area such as a coral reef or mangrove forest. These eggs have an outer membrane that helps them to stay buoyant and allows them to drift with the ocean currents until they hatch. Once hatched, the baby tiger sharks are independent of their mother and must fend for themselves. As these young tiger sharks grow, they will migrate toward open ocean habitats where food is more plentiful and competition is less fierce.

Do tiger sharks attack humans, and are they dangerous?

Make no mistake about it, tiger sharks are dangerous and can attack humans, but it is rare. With their great size, we are no match for them, and they can eat almost everything they swim past, even human garbage. This instinct makes them dangerous since they can mistake humans for prey. However, they usually don’t attack humans unless provoked or threatened. Be cautious, keep your distance and stay safe.

What is a tiger shark’s bite force pressure measured as PSI? 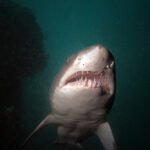 Do tiger sharks have stripes? 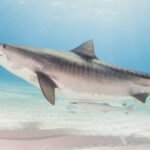 Yes, they are named after their gray vertical stripes along the sides of their body, resembling a tiger.

Experts theorize that the stripes may have a camouflaging effect for young tiger sharks, resembling the shadows of waves, and the coloring fade as they grow older.

Can you eat tiger shark meat? 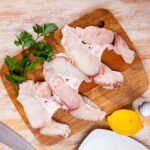 Yes, shark meat is edible. The meat has a strong smell when unprocessed, and people often marinate it in saltwater, lemon, juice or vinegar. Some popular sharks fished for humans to eat, are requiem shark, tresher shark, shortfin mako shark and porbeagles. In Asia, shark meat is often sold salted, dried or smoked. A few countries where shark meat is popular is Japan, Iceland, Australia, Sri Lanka, Mexico, Yemen, and parts of Canada, parts of Africa and parts of India. In the Lavant, people have been eating shark since the 12th century.

Yes, sea turtles are a staple meal for tiger sharks. 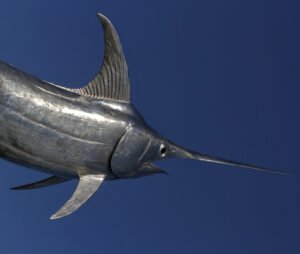 Quick, interesting, fun facts – Did you know that swordfish: What is a swordfish? A swordfish (xiphias gladius) is a large billfish that lives in the open ocean in warm temperate waters around the world…. 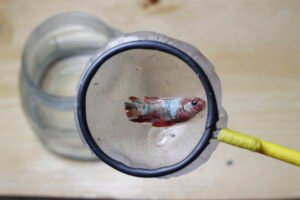 Discover the truth about betta lifespan and what causes these fish to die. How old do bettas get? What are the factors that determine their lifespan? These are all critical questions to a new betta… 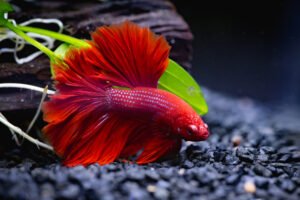 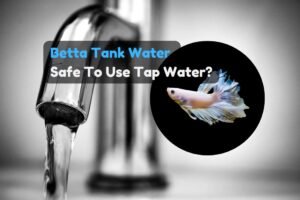